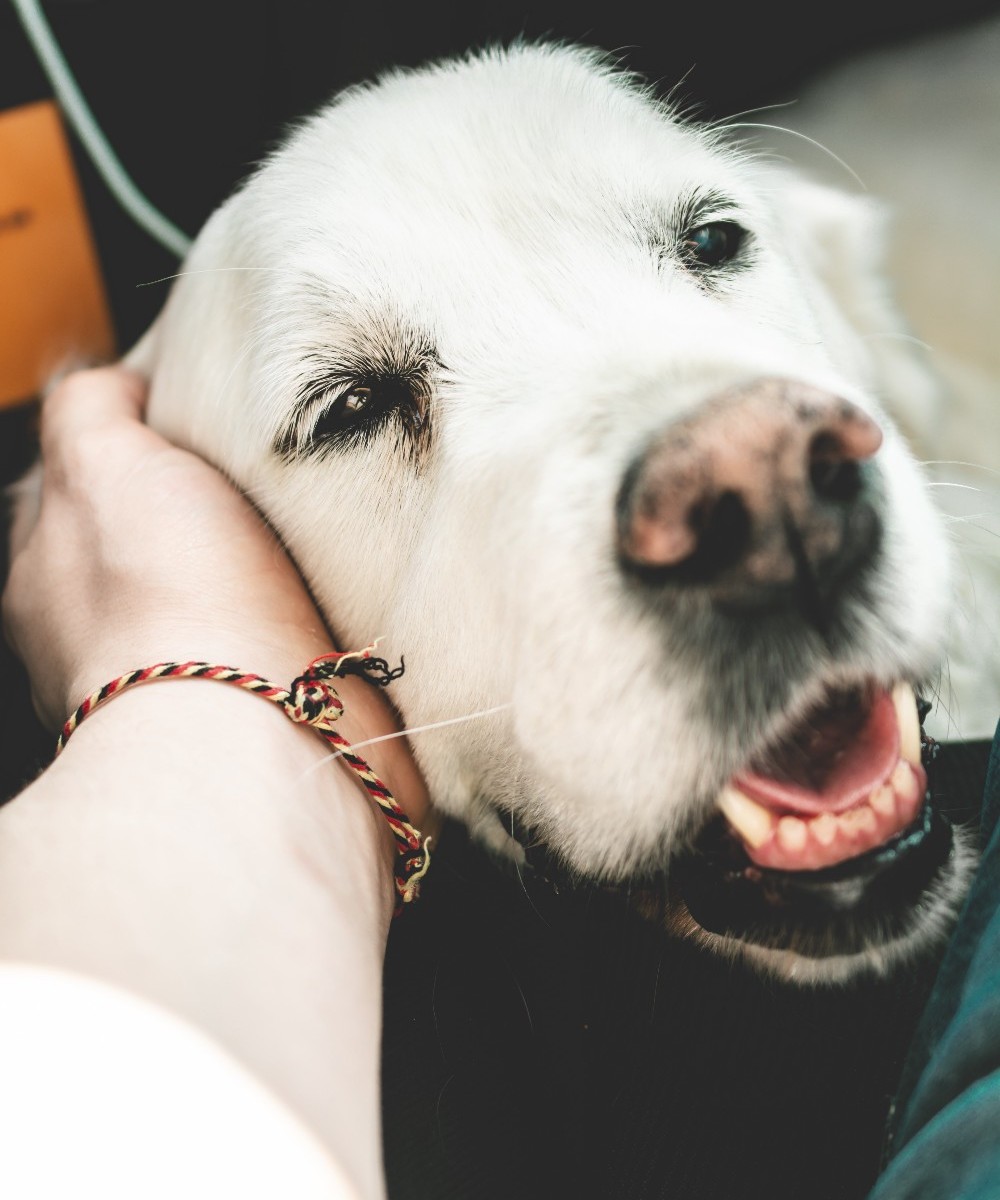 How I determine what’s growing under your pet’s skin.

It’s a sunny spring Saturday and you have just placed your car into park at the local open space. You unlock the trunk and swing around the side of the car with your best friend’s leash in your hands. Marvin, your 8-year-old yellow lab is, as always, pacing back and forth in the trunk anxiously awaiting your arrival to free him. He clumsily soars from the car as soon as the trunk opens nearly bowling you over on his way out. “Marvin!” You shout, immediately causing him to halt. “Thank goodness for all that training,” you think to yourself as you saunter over to him hooking up his leash. It’s finally time for a weekend hike; you feel as if you’ve been looking forward to it all week. As you begin to walk you notice that Marvin’s harness has rotated a little. You bend to fix it and as your hand passes over his flank you notice that something feels different. There is a small lump on his side. You pass your hand repeatedly over it until you’re convinced it is real and then stop to wonder what it could be. You try to see if it bothers him so you squeeze it harder and move it around. The only response you get from him is a whine in anticipation of hiking. You deem that it’s not an emergency and begin your hike.

This situation is an all too common one in the veterinary world. Dogs and cats both, but dogs especially, get growths or masses of their body. In the veterinary setting, you may hear the words growth, mass, or tumor used interchangeably as they all imply an accumulation of cells or tissues (benign or malignant). Hearing your veterinarian call your animal’s lump a growth, mass, or tumor before testing does not suggest that they believe your pet has cancer.

There is a wealth of possibilities for what is causing a mass in a dog or cat. There are literally dozens of potential diagnoses for any individual growth. This can vary from benign processes like cysts or fatty tumors (Lipomas) to more malignant ones such as Mast Cell Tumors or Soft Tissue Sarcomas. Feeling a growth on your pet can be scary, but in general there is nothing to panic about when you first find it. It is; however, important to try to keep track of it, as rapidly growing masses are usually ones to be most concerned about. It’s always important to note the characteristics of a mass as well. This includes details such as whether it is occurring on the skin (cutaneous) or beneath the skin surface (subcutaneous), whether it is freely mobile or fixed, firm or soft, warmer than body temperature, ulcerated, or if there’s any discharge from it. These can all be indicators of whether something is more concerning. In general, signs of more aggressive masses include ulceration — a visible break in the skin, redness, rapid growth, and inability to move the mass around*. Masses that are subcutaneous, freely mobile and slow growing are often benign. Far and away the most common of this mass type is a Lipoma. Lipomas are accumulations of fat cells. They rarely create problems; although, they can occasionally get so large that they compress muscle, nerves, or other important tissues. For example, in one case, I removed a 4.5-pound (~2 kg) Lipoma from the side of a 40-pound (~18 kg) dog.

Now, let’s get back to Marvin.

After your hike you decide you’ll see if your vet can see you today because the office is on your way home. You call them and they tell you to just come on in. They’re slow today for some reason. You know Marvin won’t be thrilled, but that’s okay, they usually make it up to him with treats. So, you arrive at the clinic and are put into an exam room. After the usual discussion with the technician, the veterinarian enters and you discuss the primary reason you’re there. The veterinarian evaluates all of Marvin, checking his heart, lungs, feeling his abdomen, etcetera, and then finally she arrives at the area of your concern. She feels the mass and looks at you, “Is this what you were feeling?” You nod, swallowing a feeling of unease about what she’s about to say next. She moves the mass around and after what feels like an eternity, you finally hear yourself ask, “Is it cancer?”

She glances quickly up at you and frees her hand from the mass. “I sure don’t think so, but I can’t tell you that for sure just by feeling it,” She says. “I recommend we do a fine needle aspirate to see if we can get a better idea of what we’re dealing with!” She quotes you the price for the procedure and you approve it without another thought. Only after they take Marvin from the room do you start to wonder to yourself… “A fine needle what?”

A fine needle aspirate, or FNA, is a simple procedure where the veterinarian literally sticks a needle into the mass multiple times to try to collect cells from it. The sample is then smeared onto a glass slide, stained, and evaluated microscopically by the veterinarian. This microscopic evaluation of cells is called cytology. Cyto- is a prefix meaning cell, and -ology is a suffix meaning to study. So, cytology is literally the study of cells. It is an excellent screening tool; however, it can be limited in providing a definitive diagnosis because the cells obtained don’t always represent the cause of the mass. Many times, when I recommend an FNA, the first thought into people’s minds is that I’m doing a biopsy. An FNA is not a biopsy. An FNA is quicker, less invasive, and less expensive. So, it is a great screening tool; however, if more information is needed then your veterinarian will suggest a biopsy. A biopsy is a more reliable diagnostic to get a definitive diagnosis, and it is the gold standard (recognized best) method for diagnosing tumors of any kind. It also tends to be more invasive.

The major distinction between a biopsy and an FNA is that a biopsy requires a tissue section. The tissue section is submitted generally to a veterinary pathologist (a veterinarian who specializes in study of disease) who evaluates what is called histopathology. Histo comes from the Greek word histos which relates to tissue, so histopathology is literally the study of disease affecting tissue. Recall, an FNA seeks to look at cells from a mass, tissue is simply an accumulation of cells. So, histopathology gives a larger and more comprehensive picture and provides your veterinarian with a definitive diagnosis. Most clinics are not equipped to run histopathology in house, so it requires submitting samples to a reference laboratory; whereas many clinics will be equipped to evaluate cytology.

There are two broad categories of biopsy. An incisional biopsy is less invasive in general. It requires sedation or local anesthetic most of the time and your veterinarian will remove a small piece of the mass to submit to the lab. Incisional biopsies are usually considered when a mass is very large and the veterinarian wants to get an idea of how aggressive it is before attempting to remove it. It would also be worth starting with an incisional biopsy if the patient had serious reasons to avoid general anesthesia, such as an underlying heart condition. General anesthesia is required, in most cases, to obtain the second biopsy type — an excisional biopsy. Excisional biopsy is essentially what it sounds like. In this procedure, your veterinarian will try to completely excise (cut out) the mass. This is best chosen for smaller masses, masses that are known to be malignant, or when the mass is causing the pet discomfort. With this procedure, as I mentioned, patients almost always are under general anesthesia. The procedure is more invasive because it requires a true surgery and often-times requires a fairly large incision. This is an excellent procedure because it affords the opportunity to give both a diagnosis and a treatment at the same time. Wide removal of many cutaneous and subcutaneous masses provides a cure for the disease. The pathologist will evaluate either type of biopsy sample and can inform your veterinarian both what the mass is and how it can be expected to behave. For example, many subcutaneous growths, like Mast Cell Tumors (MCTs), have differing levels of severity, called a grade. The pathologist first evaluates the tissue and determines it is an MCT. They then determine the grade by evaluating cellular parameters in the biopsy sample to tell your veterinarian whether the mass appears more benign, like a grade I MCT, or more aggressive, like a grade III MCT. Biopsies are an important tool for providing necessary information to guide care decisions for your furry friend, but they come at an increased cost both financially and to your pet.

Your veterinarian returns to the room with a broad smile on her face. Marvin wags his tail by her side- his face covered in crumbs. “We had to bribe him, but he was such a good boy for the FNA.” Your vet tells you, laughing a little. She hands you the leash and you feel numb waiting for the results. “What’d you find,” you say with a small shake to your voice. “It looks like fat on the slide, I didn’t see any concerning cells at this time; and overall, I believe it’s just a Lipoma. Lipomas are extremely common masses for labs.” She tells you. You breathe a huge sigh of relief while you brush some of the treats from Marvin’s face. He’s never been a very clean eater. You wear a lighter heart as you listen to your veterinarian tell you that an FNA is a screening test, so she wants you to monitor the mass and let her know if it appears to be changing in any way. You get to head home with Marvin wagging by your side, comforted by the results of the test and happy to monitor the growth as time goes on.

Cutaneous and subcutaneous masses are extremely common in dogs, and develop somewhat frequently in cats too. If you’ve owned pets for any length of time, chances are you’ve run into a situation like this before. It is important to have any new growths evaluated sooner rather than later, in order to catch more aggressive masses earlier on in their progression. All growths have the potential to be a concern; however, there is no reason to panic when you find them. There is a logical and reliable progression of steps that can give you an answer. I hope that you found this information useful. Thanks for reading!

*This information is not meant to encourage people to diagnose masses at home, these are for informational purposes only, and hopefully to provide some peace of mind until you can see your veterinarian.

Photo by Alexandre Debiève on Unsplash